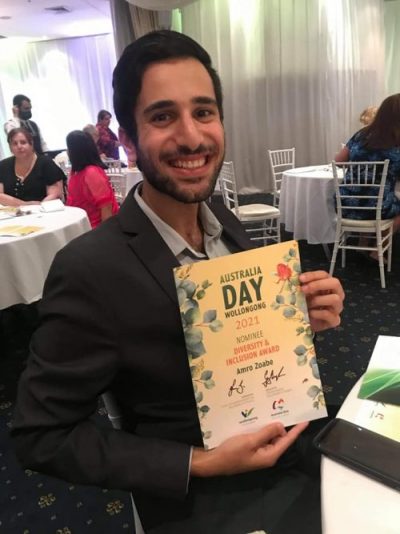 Arriving in Australia in 2016, Amro fled the Syrian conflict. However, the negative stereotypes of the Middle East perpetuated by the media continued to follow him well into his new life in Australia. Speaking to ABC Illawarra, Amro reflects on his decision to create Levant 2 Australia, an online business celebrating the artform of Arabic calligraphy.

Combining art and history, Levant 2 Australia focuses on promoting peace through a language typically associated with war and conflict. Despite the stereotype, founder Amro says that the language has a lot more to offer.

Showcasing the art of Arabic calligraphy through meaningful and impactful messages, Levant 2 Australia creates everyday products like t-shirts and mugs to bring awareness to the beauty of language and tradition.

Reflecting on the COVID-19 pandemic, Amro considers the sad reality of the spread of misinformation surrounding the Arabic language and its culture. A lack of accessible resources have contributed to the limited understanding of the culture.

Bringing awareness to both the conditions in Syria and the Middle Eastern culture here in Australia, Levant 2 Australia is working to create change one t-shirt at a time. Visit his website Levant2Aus or find him social media @levant2aus.