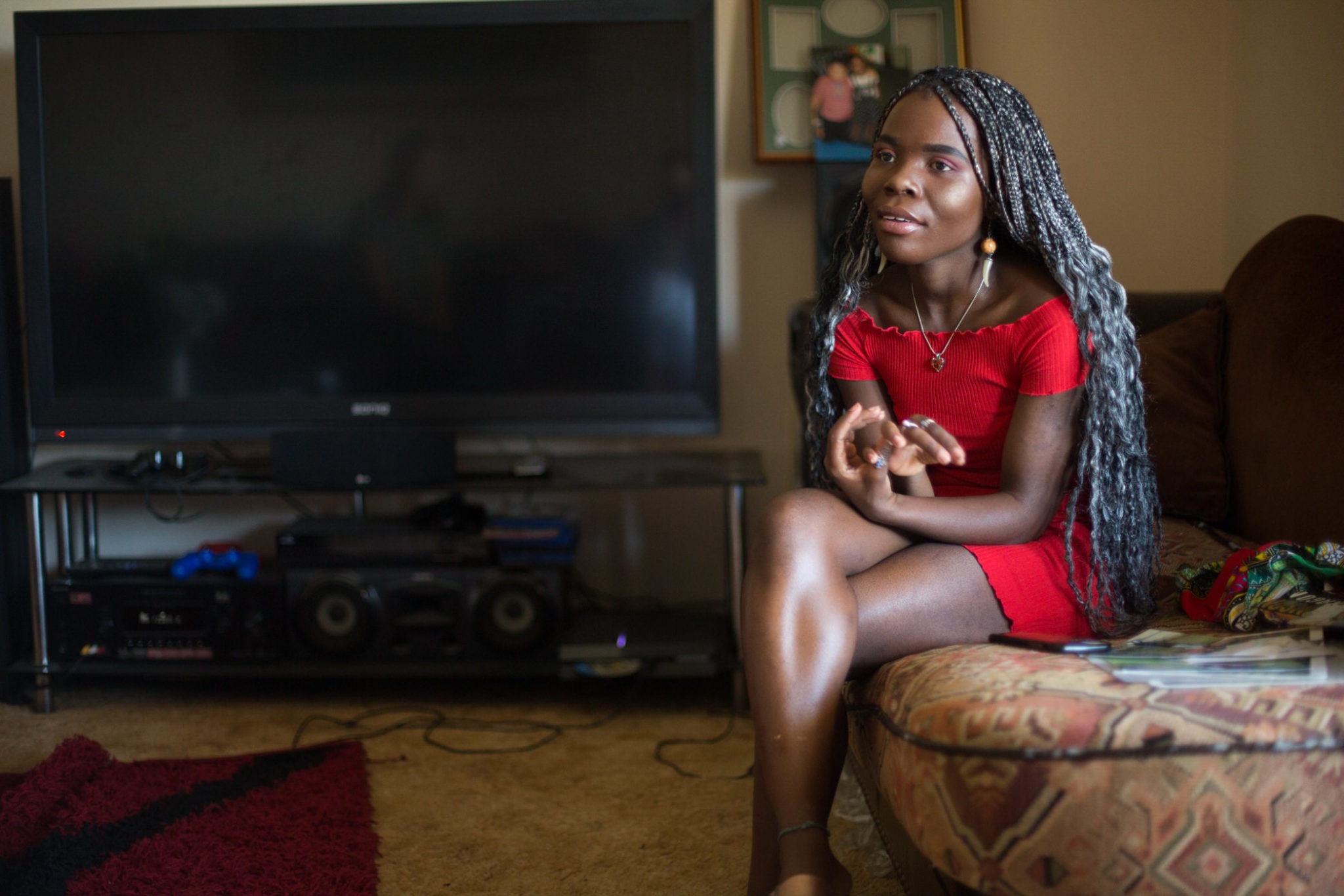 “I’m 19 and I just graduated from year 12 at Illawarra Christian School. I’m currently studying at the UOW College to get into nursing next year.

I came to Australia with uncle Dennis in 2006, with my brother Kadu, and then later on my aunty Annie (pictured below) joined us. We’re currently living in Coniston. My aunty has 2 boys here living with her, plus her husband and his sister’s children. My eldest brother is married to Martha and they have a little girl called Jay-Lynn. I was 7 when I came here.” 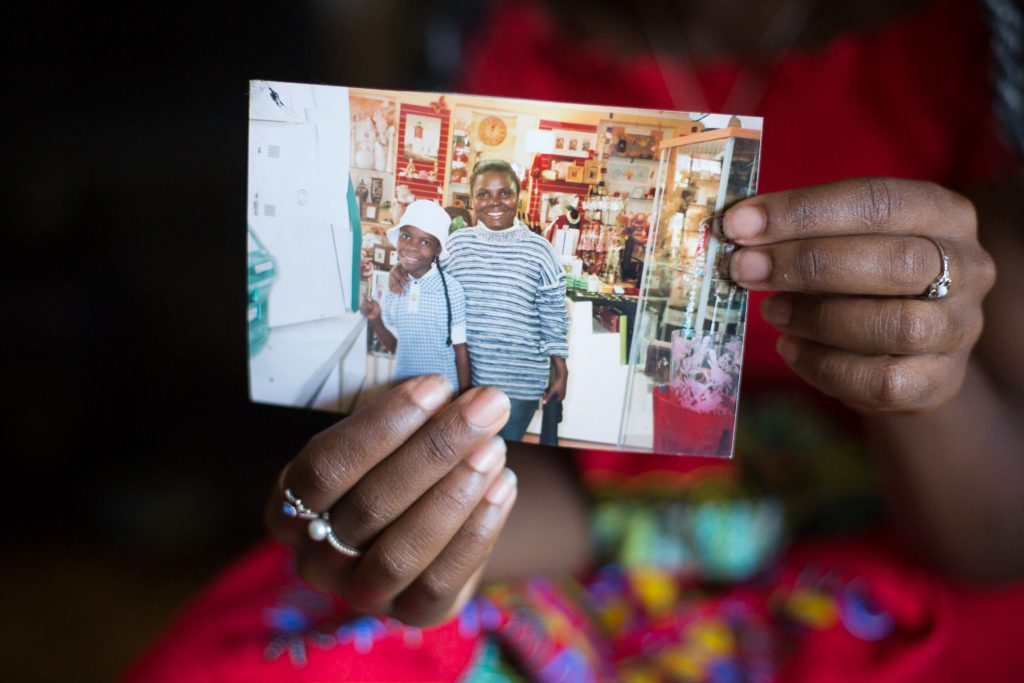 Princess and her aunty, Annie

“I just love the idea of helping people out, and I mostly want to learn my skills from here so that I can go back home and help train people over there (in Liberia)…

When I was little, my aunty always told me stories about how the hospitals over there are really bad, and people don’t get treated really well. And from that moment I was like ‘when I’m older, I want to be a nurse and go back and educate people more on how to do things, and help people over there too.’”

“If I’m not studying, I’m either reading or writing.  I like reading stuff on people’s stories, like biographies; I like romance, but it kind of depends, it has to be true.

I just like writing about reality. I write on my phone, I’m not really into diaries and stuff. When I was little I did, but I don’t know where I placed everything, because when we moved houses I lost everything. I like writing speeches, as well. Everyone says to me ‘You should become a preacher,’ and I say ‘Mmm, we’ll see.'” [laughs] 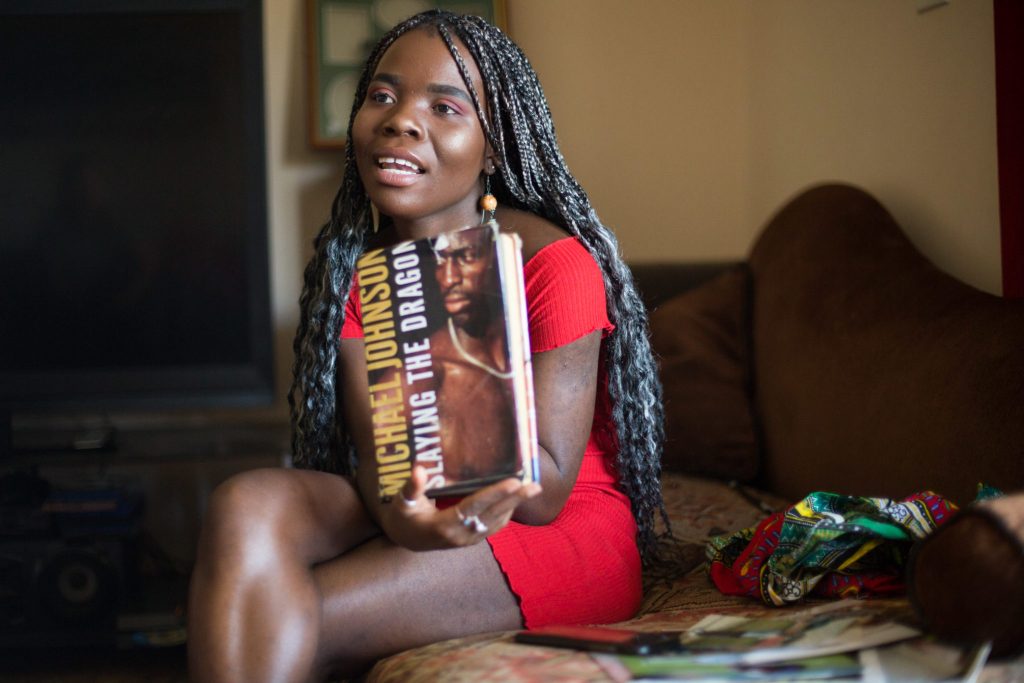 “This is my favourite book. Michael Johnson is an American athlete – a sprinter. It talks about his life, and everything he went through, and how far he went to get to where he was. ‘Slaying the Dragon’ refers to all the obstacles that you go through in life, and how to overcome them, or at least that’s how I view it.”

Do you have a favourite passage in the book?

“‘The line between success and failure is so fine, we seldom know when we cross it, so often we are on the line and we do not know it’

Another quote that I try and live by is ‘When I stand before God at the end of my life, I will hope that I won’t have a single bit of talent left, and I can say that I used everything you gave me.'” 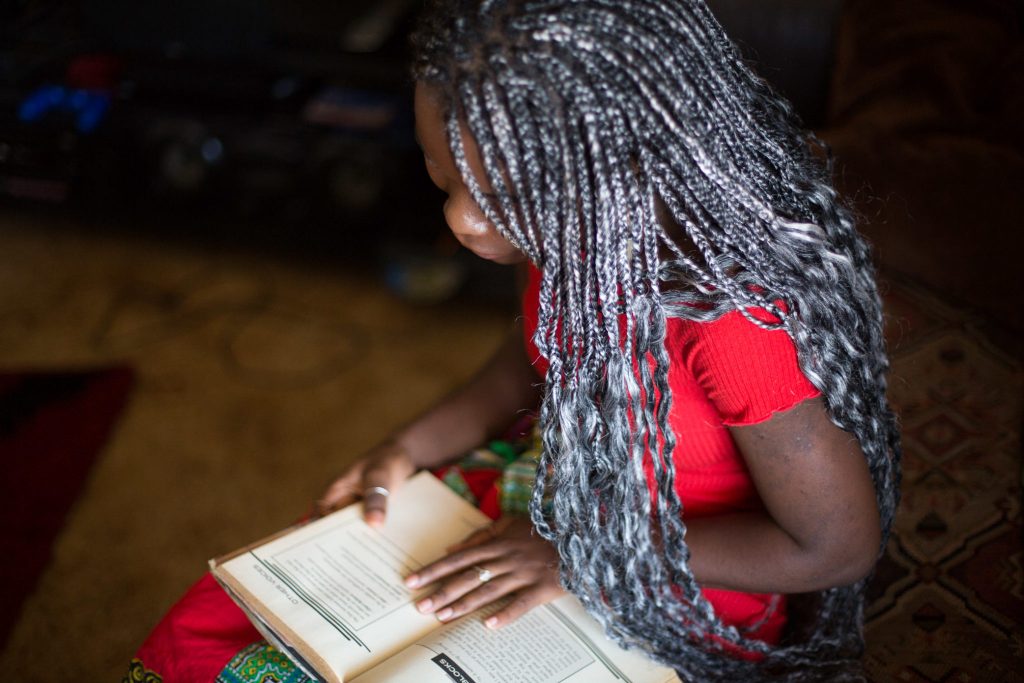 “I’m really passionate about public speaking. I like motivating people, because I think everybody needs a bit of motivation and encouragement to reach their goals. Even though sometimes I lose my motivation, I think if people have the support- and you know they say ‘charity starts at home…’ and I feel like I also want to reach kids in Australia as well; encourage them.

There are so many young people on the streets that don’t really have the right people around them to influence them in the right way, so they’re just following the wrong crowd and the wrong friend. If they’re hearing the right thing and hearing that people love them and care about them, then there might be hope for their future.

We are the future generation; it’s up to us to encourage each other and be there for each other. I’m not really one of those people that is arguing or fighting… It’s up to us to build each other up and help each other rather than bring each other down.  That’s why I like surrounding myself with people who lift me up instead of bring me down.”

Princess and one of her closest friends

“My parents fled from Liberia to Ghana because of the war, with my brother; I was still in my mother’s tummy, and a few weeks after, I was born. Things in Ghana were really hard… and my father went off to look for work, so that he could provide for the family, and he never came back.

And so, because I was just a baby then, and my brother was pretty young too, my mum had to go out to look for work so that she could get us food, so she left us with our uncle, Dennis, she too never came back… And then my uncle Dennis found my aunty later in the camp and we all started living together until we came here.” 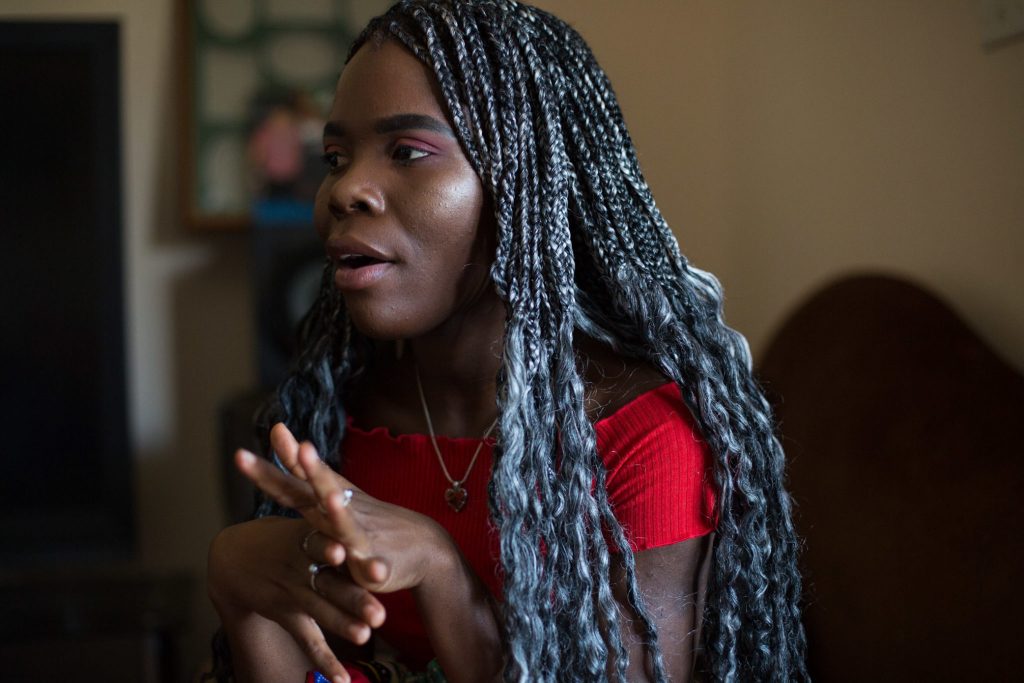 “We still have hope, it’s good to have hope, because anything is possible, you know? You never know.

There was one year, we were in a camp called Buduburam camp in Ghana and a family friend told us ‘your mother came looking for you,’ and we talked to her, but we haven’t really heard much since.”

Princess and her brother, Kadu, in their school photo

“[In Ghana], I’d been to school on and off, I do remember being in class, but it wasn’t much because if your family didn’t have money, you couldn’t go to school…

Coming to school here, I was a bit nervous. I was really quiet at first, because I didn’t know how to speak much English when I first came, so I just sat quietly but once people found out my name was Princess, they’d come up to me and say “Is your name Princess?”.

I knew a little English because in Liberia they speak this language called Pigeon, and it’s just like improper English, so I knew how to speak a little bit, but I didn’t know how to have a full on conversation with people. And then, half way in year 2-3, I was bullied a bit. So I was always upset. And then a family friend said we could go to Illawarra Christian School, [so we moved there the next week].” 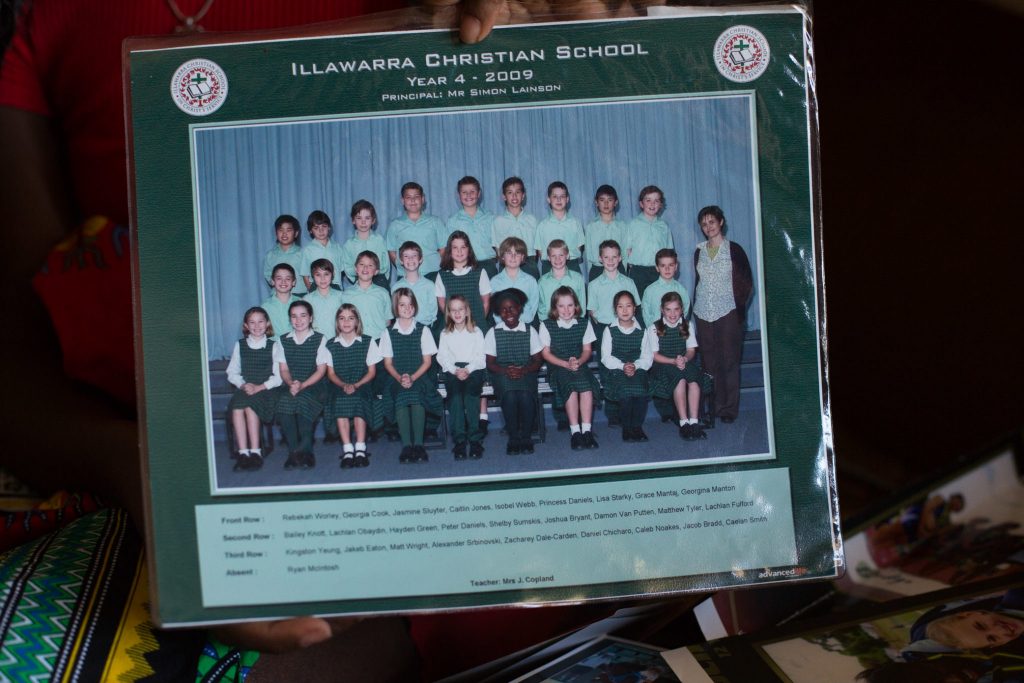 Princess in the front row of her school photo

Do you remember much about what it was like coming to Australia?

“I was 7; in Ghana, the United Nations helped us to come here. They put whole families names’ down and then every month or so they would put a list up of people who’s name can come overseas. My brother’s name came up on the list – if any of your family’s names came up on the list, you could bring your whole family over. You have to go through lots of processes, like lots of interviews and tests and needles and stuff…

I had never gone on a plane before, so I was quite scared going… And the first movie I watched was King Kong. And I was like squirming on the plane. I’d never watched TV before.

[Another memory of coming to Australia was] stepping into Sydney Airport with that fresh new scent, it was good.” 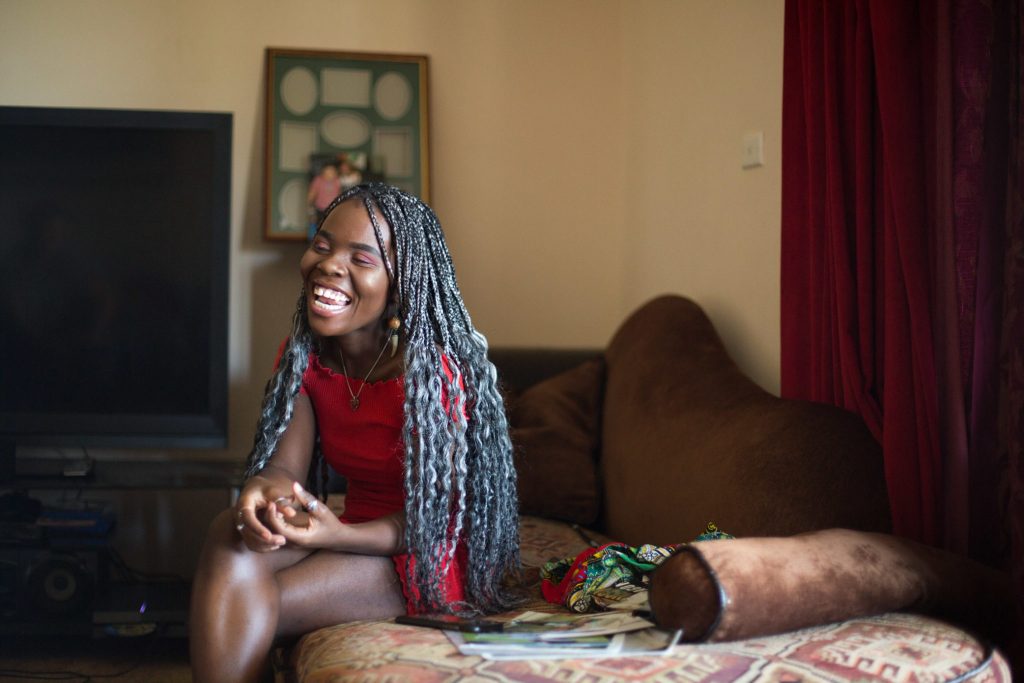 This project is a collaboration between SCARF (Strategic Community Assistance to Refugee Families), Sarah Pulling of Bear Hunt Photography, and individuals from the SCARF community.
Princess is the woman featured in this essay. A heartfelt thanks is owed to her for sharing her home and her stories for this project.
SCARF is an Illawarra-based, independent not-for-profit organisation that supports people from refugee backgrounds to navigate the personal and practical challenges of building a new life in Australia. By creating connections and generating opportunities, SCARF helps individuals and families to establish a sense of belonging, experience social and economic inclusion and access the tools for self-empowerment and independence. To learn more about SCARF, visit www.scarfsupport.org.au
To read more about Bear Hunt Photography, visit here, or to find out about projects Sarah supports or how a collaboration might happen in the future, visit here.

For the full introduction and all the previous stories from this series click here.